The DahuaWiki team has been hard at work to bring everyone as much information as possible on all the products in the Dahua North America Catalog. 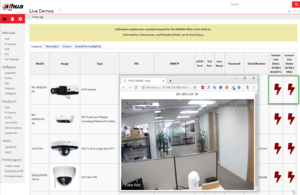 There are times when you can't install a plugin, or run Internet Explorer, but would still like to quickly show off one of the latest, and greatest cameras from Dahua. In a partnership with Unreal Streaming Technologies, the DahuaWiki team was given a free license of the uVMS software. uVMS allows DahuaWiki to host a page where you can view a Live Demo device instantly. We setup a server in the lab here in Irvine, tested the server for several weeks. We then wrote documentation on the setup process.

FLIR-Branded SMB is becoming Dahua Technology USA, and with that there will be a few changes. One of those changes will be FLIR-Branded SMB kits converting to Dahua kits. In an effort to ensure the transition goes as smoothly as possible, we have put together a crossover list for the following:

This page will also have links to the latest firmware, and compatible software for the FLIR-Branded SMB devices. 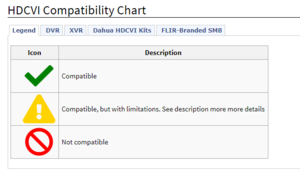 Now that HD-CVI cameras can reach all the way up to 4k resolution, it has caused some confusion regarding which recorders are compatible with HD-CVI cameras, especially with resolutions over 1080p. Some recorders are able to handle 4k HD-CVI on all channels, while others can only see HD-CVI signals up to 1080p. This is confusing, and digging through specification sheets to locate this information can be time consuming. With this chart you can quickly identify the capabilities of all of our DVRs and XVRs. 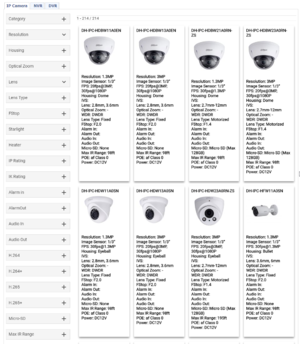 The product selector had a few bugs that needed to be addressed. We were able to get those issues resolved, and added additional fields to help refine your search, and locate the product you need!

ONVIF recently put out some very good information and charts that breaks down the function of each ONVIF profile. This is especially important when dealing with 3rd party cameras or 3rd party VMS software. Hopefully this helps to demystify some of the features and functionality of ONVIF.